Unemployment benefit claims came in at 6.6 million in the latest Department of Labor print on April 9, marking a total of almost 17 million claims in the past three weeks, staggering numbers.

The Federal Reserve announced April 9, 2020, actions to provide up to $2.3 trillion in loans in efforts to support the economy.  This will be accomplished through a number of initiatives including:

It’s been less than two weeks since the previous round of Federal Reserve program announcements of massive support for financial markets and we’re back to this: 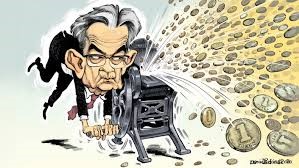 Bloomberg reports many CLO market insiders are skeptical that such efforts related to TALF will be able to resuscitate the disruption in the CLO markets.  This is important to the broader $1.2 trillion leveraged-loan market as CLOs are the biggest buyers in the leveraged loan market.  Whether the Fed’s efforts will prop this market up, only time will tell.  One CLO manager disclosed that it is using the recent market volatility to suspend distributions to subordinated tranches of its CLO to reinvest in deeply discounted loans in what it anticipates will be highly accretive transactions in the long run.  Initial reactions to the Fed’s April 9 announcement  were positive for Eagle Point Credit Company, Inc. (NYSE: ECC) and Oxford Lane Capital Corp. (NYSE: OXLC), two publicly-traded pure-play holders of CLO equity/subordinated tranches, which traded up 19% and 17%, respectively during the April 9 trading session.  ECC and OXLC have traded down 41% and 25%, respectively, from their values as of February 28, 2020.  You remember before back before things got really crazy.

As the Federal Reserve has recently announced moves to shore up the leveraged loan and junk bond markets, some industry participants are clamoring for further TALF collateral eligibility including non-agency MBS, credit risk transfers, restructured/reperforming mortgages, and unsecured personal loans.  Perhaps it may be more prudent to allow some of these loans to just go into non-accrual, migrate to default and eventually charge-off and penalize the firms that made risky loans.  Maybe at least keep up appearances that we learned something from 12 years ago and that moral hazard is not just a metal band from Germany?

Reuters reports that U.S. Lenders including JPMorgan Chase & Co, Wells Fargo & Co, Bank of America Corp and Citigroup Inc. are in the process of setting up independent companies to own oil and gas assets in efforts to avoid losses on energy loans to companies that may go bankrupt given recent declines in oil prices.   Such plans are likely to require waivers from regulators due to restrictions and limitations on bank involvement with physical commodities.  Reuters notes that banks have not “done anything like this since the mid-1980s.”  Sources indicated that it was likely to take months for banks to structure the entities and obtain any necessary regulatory approvals, perhaps providing a lifeline for some oil and gas firms for the time being.

Hospitality is in Trouble

STR Data indicates that for the week ending April 4, 2020, U.S. hotels occupancy declined to 21.6%.  Occupancies on Oahu declined to 7.0%, with RevPAR of $10.83.  Jan Freitag of SVP of Lodging Insights at STR notes that comparative analysis of occupancy trends in China and Italy over the past weeks leads to a conclusion that “we can with certainty say that we are not yet close to the bottom in the U.S.  However, the timeline for that decline and the eventual recovery are much tougher to predict because there is still so much uncertainty around the COVID-19 case numbers.”

Chip Rogers, president and CEO of the American Hotel & Lodging Association estimated that perhaps 25,000 of the 56,000 hotels across the U.S. could close temporarily in the next few weeks.

Mortgage REITs Continue To Have A Bumpy Ride

New Residential Investment Corp. (NYSE: NRZ), the fifth largest mortgage REIT by market capitalization, announced that it was cutting its dividend 90% and that it sold $6.1 billion in assets to meet margin calls from creditors.

Chimera Investment Corp. (NASDAQ: CIM) announced that it had sold off a portfolio Agency RMBS in efforts to satisfy creditor demands and that its board approved a reduction in second quarter distributions of 40%.  CIM is also looking to float $325 million in convertible notes to shore up liquidity.

AGNC Investment Corp (NASDAQ: AGNC), the second largest mortgage REIT by market capitalization, noted that recent volatility and lack of liquidity in the market were unprecedented and its CEO Gary Kain opined that the actions of the “Federal Reserve over the last several weeks, in particular its substantial acquisitions of Agency MBS, have significantly improved valuations and stabilized the broader mortgage market.”

The recent mortgage REIT troubles have begun to attract the attention of some vultures.  Bloomberg reports that some private equity and hedge funds are in discussion with some of the REITs to buy portfolios or take equity stakes in the firms.  Bloomberg reports that mortgage REIT equities have lost over $50 billion in value in 2020.  The following chart highlights the decline in the MVIS US Mortgage REIT Price Index, which tracks REITs that derive at least 50% of their revenues from mortgages (26 total REITs) over the past six months.

On April 9, 2020, the Treasury Department and IRS announced Notice 2020-23, which extends various tax deadlines for individuals and businesses, including the timeline for investment into Qualified Opportunity Funds. Under Section 1400Z-2 of the Internal Revenue Code, investors will be able to receive QOZ tax benefits if they reinvest capital gain amounts into a Qualified Opportunity Fund within 180 days of the gain recognition date. With the extension, if an investor’s 180-day investment window was set to expire between April 1, 2020 and July 15, 2020, the investor will now have until July 15, 2020 to make a qualifying investment. This extension should give (savvy) investors who realized capital gains in the last six months some additional time to evaluate QOZ investment opportunities.  In light of the recent market downturn, the pool of eligible QOZ capital may have shrunk a little.

What is ESG and Where is it Headed?
Evaluating Cap Rates Through a Due Diligence Lens
How Inflation and Interest Rate Increases Could Impact Real Estate-Focused Alternative Investments
A Guide to Understanding Proposed Changes to the QOZ Program