Do you share the feeling that seemingly decades worth of news and policy decisions have transpired in the last few weeks? The following is our humble attempt to update you on some broad policy changes and trends within real estate and credit we have noted over the past couple of weeks that will impact alternative investment programs.

In the non-traded market we continue to see REITs taking action in response to the COVID-19 outbreak. These broadly include suspensions of distributions, suspensions of share repurchase programs, drawing out available credit on revolving credit lines, and lately, an emerging trend of reduced frequency related to NAV calculations. These trends generally follow developments across publicly traded REITs as well, sans the liquidity and NAV measures. Given the uncertainty related to the economic fallout and duration of the COVID-19 outbreak, it is not surprising that firms would seek to preserve liquidity as much as possible. Unfortunately, these developments are generally not positive for shareholders’ investment objectives in the short run.

We anticipate continued distribution reductions and suspensions across the gaming, retail and hospitality sectors of real estate, and perhaps into the office sector as well (depending on the duration of the outbreak) as more office workers adapt to working remotely, which may decrease office demand. Further we expect that there will be little to no guidance from public companies on their 2020 operations (many firms have already pulled 2020 guidance) as the “known unknowns” related to the COVID-19 outbreak and social distancing responses preclude any reasonable estimates on operations. We eagerly anticipate updated NAVs on many perpetual REITs in light of the volatility across publicly traded REITs. We will continue to monitor the shareholder liquidity for underlying nontraded programs and interval funds as well. One would anticipate that there will likely be an increase in oversubscribed tender offers across multiple programs, including interval funds, in the near future as investors recoil.

The Federal Reserve has broadly expanded its policy response with multiple developments. First, the unveiling of the Primary Market Corporate Credit Facility (PMCCF), which expands the Federal Reserve’s window to allow for direct lending to eligible (non-bank) borrowers. The mechanics of the PMCCF entail that the Federal Reserve Bank of New York will lend into a special purpose vehicle that will then facilitate lending to the eligible businesses, which broadly speaking is investment grade rated corporate borrowers.  This is unprecedented for the Federal Reserve, which has historically functioned as the lender of last resort by lending to banking institutions who have then made capital available to businesses. The PMCCF effectively disintermediates the banks from this process.

Additionally, the Federal Reserve has created the Secondary Market Corporate Credit Facility (SMCCF) through which the Federal Reserve will directly purchase investment-grade corporate bonds and certain exchange traded funds (ETFs) on the open market. Our central bank has now gone the route of the European Central Bank and the Bank of Japan in pouring in direct support of corporate credits. The Federal Reserve will limit such purchases to up to 10 percent of the issuers’ outstanding bonds. The SMCCF is planned to exist until September 30, 2020, unless extended.

The Federal Reserve, in concert with the Federal Deposit Insurance Corporation, National Credit Union Administration, Office of the Comptroller of Currency, Consumer Financial Protection Bureau and the Conference of State Bank Supervisors (collectively the Regulators), announced that they would not automatically categorize all loan modifications related to COVID-19 as troubled debt restructurings (TDRs). The Regulators noted that “short-term modifications made on a good faith basis in response to COVID-19 to borrowers who were current prior to any relief, are not TDRs. This includes short-term (e.g., six months) modifications such as payment deferrals, fee waivers, extensions of repayment terms, or other delays in payment that are insignificant.”  This opens the door for financial institutions to broadly provide debtors with measured relief in light of the economic dislocation attendant to the winding down of substantially all non-essential economic activity, without stigmatizing the underlying credits and requiring additional valuation support for such modified loans. Practical effects of this policy would preclude such modified loans as being recorded as on non-accrual or past due. Additionally such loans would also remain eligible for the financial institution to post as collateral in accessing the Federal Reserve’s discount window. This seems like a practical, and hopefully short-lived, measure in the face of the economic impact from societies’ efforts to prevent the spread of COVID-19.

These policy changes are not even the most significant recent Federal Reserve developments. That honor goes to the notice that it would purchase an unlimited amount of U.S. Treasuries and agency mortgage-backed securities in light of the outbreak.

Not to be left out, the federal government recently announced an approximately $2 trillion (that’s trillion with a T!) fiscal stimulus package in efforts to prop up the economy through the COVID-19 outbreak.  Details on the 883 page bill can be found here.

This Federal Reserve policy action plus the fiscal stimulus is akin to D-Day from a policy perspective. As former European Central Bank chairman Mario Draghi noted in July 2012 in the midst of the Eurozone sovereign debt crisis “whatever it takes”, the same mantra seemingly applies here. The times we live in might be a little too interesting…

Trouble in Repos and Corporate Credit?

Thomas Barrack, chairman and CEO of Colony Capital, Inc., has penned an interesting piece detailing COVID-19 stresses and the effects of the winding down of a non-essential facets of the economy, particularly in the commercial mortgage markets. Mr. Barrack prescribes multiple policy remedies including:

It seems some of Mr. Barrack’s policy proposals, at least regarding TDRs, have found favor among the regulators as noted above. Additionally, some of the concerns with commercial mortgage markets are beginning to manifest themselves.

AG Mortgage Investment Trust, Inc. has filed suit against the Royal Bank of Canada related to margin calls on repurchase agreements between the two entities.  The Wall Street Journal reports that RBC has moved to unload approximately $600 million worth of commercial real-estate debt “seized from clients in recent days, trying to protect itself from pain spreading through the mortgage market.” AG notes that RBC is seeking to take advantage of market turmoil and is applying “opportunistic (and unfounded) markdowns” in efforts to trigger margin calls and seize collateral. AG further notes that RBC’s action could have a cascading effect that “could push the [mortgage REIT] industry into the abyss.” This margin call activity is in line with margin calls on TPG RE Finance Trust Inc. (NYSE: TRTX), from multiple counterparties, including JPMorgan Chase & Co., Wells Fargo & Co., and Goldman Sachs Group Inc. TRTX has noted that it has posted additional collateral to meet margin calls in the past week and that “there is no certainty” that it will be able to meet any additional margin calls that may be forthcoming. TRTX subsequently delayed first quarter distributions to common stockholders until July 2020. TRTX further noted that it was looking at the potential availability of government programs for assistance. It is possible that certain recent policy developments at the Federal Reserve may alleviate TRTX’s plight by directly providing liquidity on its underlying mortgage assets. Publicly traded mortgage REITs, which heavily utilize the repo market for financing, have been on a roller coaster in recent trading sessions, with many tickers trading below 50% of net book value, only to vigorously rally back on March 26, 2020.

We are acutely aware that the measures in place to “flatten the curve” of the COVID-19 outbreak will likely migrate the non-financial crisis we are facing into a possible financial crisis, though the stimulus and Federal Reserve policy implementations should help mitigate these concerns. It is hard to envision what the bid for broader equities markets would be if mass credit default events prospectively materialize, be they in the commercial mortgage space or in the highly leveraged corporate debt space.

Publicly Traded REITs Have Been Battered

S&P Global produced the following chart that highlights REIT sector premium/discount to NAV estimates as of the end of Q1 2020.  It is not a pretty picture: 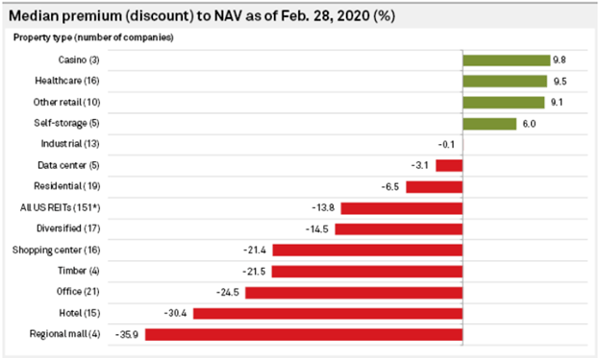 Dramatic declines across almost all sectors with data centers the notable exception.

Retail and hospitality landlord issues continue to be on the frontline of the COVID-19 outbreak. Here are some quick updates from publicly traded companies.

Publicly Traded BDCs Have Been Battered

S&P Global Ratings has forecasted that the baseline default rate for U.S. speculative grade corporate debts will spike to 10% to 13% within the next year, up from 3.1% as projected in December 2019, and significantly above the approximately 3% historical default rate.  A wise sage once noted that a rolling loan gathers no loss…or extend and pretend, whichever you prefer.

The following chart highlights the performance of the S&P/LSTA U.S. Leveraged Loan 100 Total Return Index, and capital flows from two ETFs with aggregate AUM in excess of $3.5 billion that generally track the index’s performance. The index has climbed back from the violent downward swing as the Federal Reserve announced unprecedented support for businesses via its commercial paper funding facility, and the $2 trillion stimulus with many provisions to prop up businesses was passed.

Similarly, high-yield spreads are entering into some extreme territory:

The weakness in the performance of the leveraged loan/high yield credit sectors and continued economic disruption in the broader economy portend very challenging times ahead for the broader leveraged loan and credit-oriented funds, including BDCs and some interval funds.

According to data from BDC Investor, all publicly-traded BDCs are now trading at a discount to their reported NAVs. More than half of listed BDCs trade below fifty cents on the reported dollar, with the average price/NAV of the whole sector a dismal 0.47x. This average price/NAV is more in line with the price/NAV of the weakest approximate decile of the BDC market over the past few years. This historical weakness is coming off a rally in which approximately half of the listed BDCs were trading at or above NAV just a few short months ago!

What is ESG and Where is it Headed?
Evaluating Cap Rates Through a Due Diligence Lens
How Inflation and Interest Rate Increases Could Impact Real Estate-Focused Alternative Investments
A Guide to Understanding Proposed Changes to the QOZ Program